Now Boris has the virus, but he's not too poorly

I really hope no-one is harmed from this - but he caught it from someone and he may have spread it. One infection typically leads to two to three others. Each of those to two or three others and so on. It soon gets to thousands.
I saw him and Rishi Sunak standing outside No. 10 last night showing their admiration and respect for the NHS. They were a good two metres apart, on the pavement.
Yes on the pavement. Not on the doorstep, balcony or in a window as the organisers had sensibly  suggested. No they were on the pavement. In the photo below Boris has come out of No. 10 skipped down the two doorsteps (you know, the ones he should have stood on) and stood on the pavement. By pure chance Rishi enters stage left and stands two metres away from Boris. What timing. 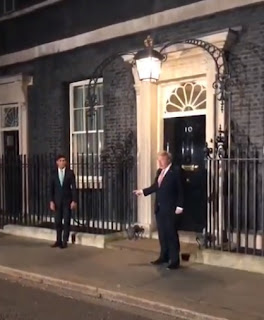 So is this another case of do what I say, not what I do ?
As we know:
Strict Rules have been placed on people's personal movement to limit the spread of coronavirus.
Under the restrictions, people must stay at home, and only leave for the following reasons:
- to exercise once a day - either alone or with members of your household.
- shopping for basic necessities, although this should be done as little as possible.
- medical need or to provide care for a vulnerable person.
- travel to and from work but only where this is absolutely necessary.

Bad news guys. Photo opportunity isn't on the list.
In the scheme of things this wasn't bad. They were nearly at home, or is it work, or both ? Boris was nearly on his step and they were standing apart.

TV coverage of this event showed plenty of people across the country using this as an excuse to mingle randomly at close quarters in the street.

The cruel irony here is that what was designed as a thank-you to the NHS, may actually result in a spike of infections, quite the opposite of what they need.

Popular posts from this blog

July 06, 2020
As evidenced below, the government have given a £250m+ contract for PPE to a small investment strategy company, they were the only bidder for the contract !  How the hell did this happen ? According to Tenders Electronic Daily (TED the journal of EU procurement) The Department of Health have awarded a contract have awarded a £252,500,000 (!!) contract for the supply of PPE. The contract was awarded on price and Ayanda Capital were the only bidder. (  https://ted.europa.eu/udl?uri=TED%3ANOTICE%3A309303-2020%3ATEXT%3AEN%3AHTML&src=0  ) According to Companies House the last filed unaudited accounts ending 31 December 2019 stated that the average number of employees was 5 and fixed assets were £2.9m According to  https://www.ayandacapital.com  they are a family office focused on a broad investment strategy, PPE isn't mentioned.
Post a Comment
Read more

More than 50,000 additional deaths and Stanley is flogging a book !! Outrageous

June 16, 2020
On Sky News this morning we had: Stanley Johnson re-launching his book "The Virus". As the body count mounts (now one of the highest in the world) at the incompetent hands of a government led by his hopeless son Boris, Stanley is now trying to make a few quid out of his book. "It's got a new cover" he chortled. All proceeds to the the NHS ? What do you think ?
Post a Comment
Read more

Will Boris turn up for PMQs today ? 20th May