The mood music is about loosening lockdown next week - why ?

May 10, 2020
It's widely accepted that the UK came late to lockdown and when it did come, it was looser than many nearby countries, giving many people the excuse to bend the rules with little fear of being found out.

We were told that the idea was to "flatten the curve", reduce the R number below 1 and protect the NHS. Well, to some extent that worked, or at least, is working.


The NHS has coped (and the new hospitals have hardly been used) although for some reason our deaths per million figure (yes, apples with apples !) is higher than Italy !! 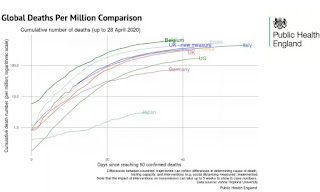 Popular posts from this blog

July 06, 2020
As evidenced below, the government have given a £250m+ contract for PPE to a small investment strategy company, they were the only bidder for the contract !  How the hell did this happen ? According to Tenders Electronic Daily (TED the journal of EU procurement) The Department of Health have awarded a contract have awarded a £252,500,000 (!!) contract for the supply of PPE. The contract was awarded on price and Ayanda Capital were the only bidder. (  https://ted.europa.eu/udl?uri=TED%3ANOTICE%3A309303-2020%3ATEXT%3AEN%3AHTML&src=0  ) According to Companies House the last filed unaudited accounts ending 31 December 2019 stated that the average number of employees was 5 and fixed assets were £2.9m According to  https://www.ayandacapital.com  they are a family office focused on a broad investment strategy, PPE isn't mentioned.
Post a Comment
Read more

More than 50,000 additional deaths and Stanley is flogging a book !! Outrageous

June 16, 2020
On Sky News this morning we had: Stanley Johnson re-launching his book "The Virus". As the body count mounts (now one of the highest in the world) at the incompetent hands of a government led by his hopeless son Boris, Stanley is now trying to make a few quid out of his book. "It's got a new cover" he chortled. All proceeds to the the NHS ? What do you think ?
Post a Comment
Read more

Priti is back - "I am leading..." just when we thought things couldn't get any worse !

April 10, 2020
Back in February Priti Patel, Home Secretary (aaarrgghh !!), repeatedly vowed to tackle "counter-terrorism offenders" following a shocking knife attack in Streatham.  Since then her profile has been very low, I'm glad to say.  Until yesterday that is.... According to the Daily Mail website, 9/4/2020: Ms Patel, who has not been seen or heard in public since March 23, said in an unexpected radio interview this evening that police must not act in a 'heavy-handed' manner during the coronavirus  lockdown.  This on the same day that  Downing Street said Britain was at a 'critical juncture' in the battle to curb the spread of the disease and with good weather forecast for the long weekend. According to the Daily Mail, in the same article,  she also stated  "  .... w hat I would say is that I speak to the police every day, in fact I am leading operational calls every single day with our blue light family" Really ? Leading operational calls
Post a Comment
Read more